Join Alltech for an important discussion on December 7 about the integral role of media sharing stories of agriculture and with other economy sectors, how we can all work together to build a world of abundance and a Planet of Plenty™. ImPRESSive is the opportunity to connect virtually with a panel of international influential journalists from Argentina, Brazil, Canada, Ireland and the USA. 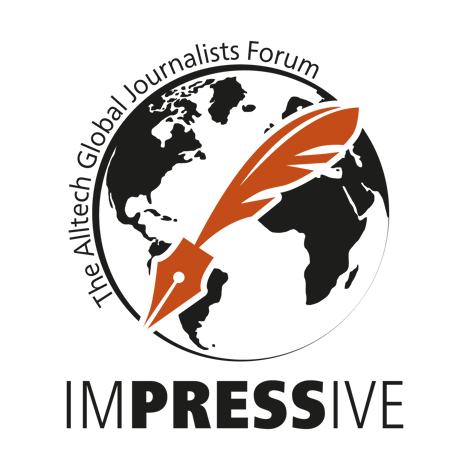 Now, more than ever, it is important to give agriculture a voice and communicate these stories to the world. At Alltech, we have a vision for a Planet of Plenty, in which a world of abundance is made possible through the adoption of new technologies, better farm management practices and human ingenuity within agriculture, supported by our pillars of science, sustainability and storytelling.

Journalist and academic research in the Department of Agricultural and Consumer Economics at the University of Illinois. For over 10 years covered various agribusiness topics for the most prominent Brazilian media publications, such as Grupo Globo affiliates. She was recognized with almost 20 national and international journalistic awards.

Claire Mc Cormack is a Researcher in the field of Media Work and Agriculture at University College Dublin where she is currently completing her PhD having received a Government of Ireland Postgraduate Scholarship award from the Irish Research Council. Claire is also an Agricultural Journalist and regularly contributes to the Farming Independent and Irish Independent. Claire’s journalistic background extends across both mainstream national media and the specialised agricultural press where she has gained substantial experience on several digital, print and broadcast platforms. Academically, she holds a Masters in Sustainable Agriculture and Rural Development from UCD, a Masters in Journalism from DCU, a Masters in Literature of the Americas from Trinity College Dublin and a BA in English and Sociology from Maynooth University. Claire also received the Veronica Guerin Memorial Scholarship to DCU in 2014.

Journalist, graduated at Federal University of Paraná. He worked at Ciência Hoje, cientific magazine and the Exame portal, famous business media in Brazil. He was reporter for Gazeta do Povo between 2008 and 2010 and returned to the vehicle in 2019, covering politics in Paraná. Since February 2021 he is editor of Economics. Throughout his career, he won the Paraná Award for Science and Technology, in the Scientific Journalism category (2012), and the Fiep Journalism Award, in the Internet category (2019).

Steve Werblow is a freelance agricultural writer and photographer based in Ashland, Oregon, USA. He is a contributing editor for The Furrow magazine and vice president of the International Federation of Agricultural Journalists, which represents journalists and communicators in 55 countries. Steve has been honored as Writer of the Year three times by the American Agricultural Editors Association/Ag Communicators Network, and has received the guild’s Photo of the Year award twice. Steve is a graduate of the College of Agriculture and Life Sciences at Cornell University.

The journalists will be joined by senior leaders from Alltech, including:

President and CEO of Alltech (USA)

Dr. Mark Lyons grew up in the Alltech business, having traveled with his father and Alltech’s founder, Dr. Pearse Lyons, from a young age to visit customers. With experience working in all regions and nearly all departments — from palletizing bags in production to researching in the lab — he has a deep and uniquely personal knowledge of the company.

Based on Alltech’s belief that agriculture has the greatest potential to shape our world’s future, he launched the Planet of Plenty™ vision in 2019. He has called for collaboration to improve nutrition, human and animal well-being, and the preservation of natural resources.

Most recently, he was the strategy director for Latin America, a position he held since his relocation to Brazil in 2017, where he worked intensely on the integration of Guabi into the global Alltech feed division, as well as aligning the Alltech Latin America strategy.

Rigolin began his career with Alltech in 2001 as a sales manager, primarily working in Paraná, Brazil. He then moved to São Paulo, Brazil, for three years and worked as a national business manager for the Brazilian poultry team, where he served as the Allzyme® Vegpro champion in Brazil.
In 2008, Rigolin relocated to the United States to serve as the Allzyme® SSF and Allzyme Vegpro global product champion, covering Latin America, Asia, the United States and Europe. Rigolin then coordinated the global poultry team as global poultry director, focusing on poultry accounts worldwide.

Over the 30 years he has worked for Alltech, Charlton has held a number of roles, both regional and global, giving him a broad overview of the company and its global business.

He graduated from the University of Nottingham in the U.K. and joined Alltech U.K. in 1991, becoming the technical manager in 1995. In 1998, Charlton moved to Cape Town, South Africa, to become technical director for Alltech in Africa and the Middle East, working with customers throughout the region. Charlton took on the role of general manager of Alltech Canada in 2000, working with customers, consultants and researchers across Canada.

In 2005, he was promoted to global Bioplex® manager, responsible for all activities relating to the Bioplex series of organic minerals. He was appointed CEO of Alltech Coppens when the company was acquired by Alltech in June 2016. Today, the business is a fully integrated part of the Alltech family of companies and represents the leading edge of Alltech’s global aquaculture development. Charlton currently lives in the U.K. and received a master’s degree in fermentation and distilling from Heriot-Watt University in 2006.